In The Necromancer’s Tale you will be involved in various combats – including early-game fisticuffs, skirmishes with the city guards, wild animals, ambushes from unsavory creatures such as gūls which haunt places of death – and some more magical foes. You’ll be supported by various undead minions as well as some mortal allies – depending on your choices in the game.

Combat is turn-based and both sequencing and the number of action points available to a combatant is based on their Agility. The combat system draws on my own tactical combat game Darkwind: War on Wheels, as well as on my other prototype (unreleased) games and ultimately an Amiga game called Critical Hit which I released back in 1995. The combat system is simple and quick, yet nuanced and augmented by a critical hits system which adds a lot of descriptive flavour along with mechanical effects. 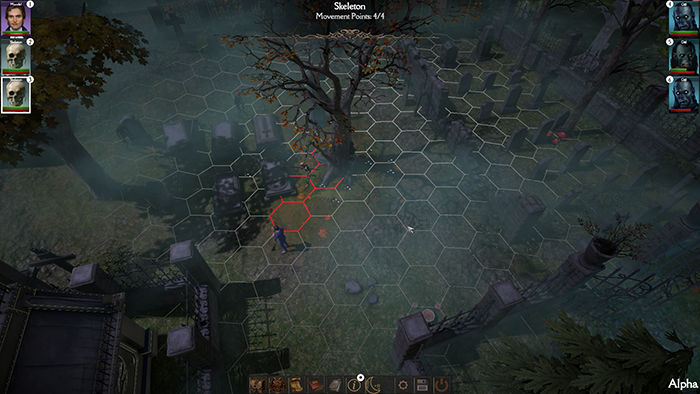 Energy and Activity are two very important ratings related to health, which every character has. Each is displayed as a percentage (0% – 100%).

Energy refers to the amount of stamina which a character has remaining. Being hit in combat reduces this, and mortal characters regain energy as time passes. When energy drops to zero, a character falls unconscious. An unconscious character is not necessarily in imminent danger of death, but significant continued damage beyond this may kill them. Certain injuries cause bleeding (unless the character cannot bleed), which causes a continuous loss of Energy as time passes. Without bandaging or rest, a bleeding character will die.

Activity refers to the ability of the character to move about and fight. It is temporarily reduced by certain critical hits (e.g. a broken leg) and by being stunned. When activity drops to zero, a character falls unconscious. When a character’s activity is less than 100%, every physical action they perform (e.g. attacking, defending, or moving – as well as their number of action points) is reduced in proportion. Thus, being stunned can seriously impact a combatant for a few turns.

When a combat starts, all ranged weapons are considered to be loaded. After firing in combat, they must be reloaded. The time taken to reload depends on the type of weapon. Muskets, for example, while being the most powerful weapon in the game, are very slow to reload – they take several turns of uninterrupted attention. The game does not track ammunition: a character never runs out of it.

To hit an opponent, the attacker must have a line of sight that is not blocked by obstacles. The following factors determine how likely an attack is to strike its target:
– The base ‘to hit’ chance of the weapon.
– The distance between attacker and defender (ranged weapons only)- this is moderated by the distance accuracy of the weapon: some weapons are excellent at short range but terrible at long range, while others retain their accuracy at distance better.
– The agility and activity ratings of both the attacker and the defender. The agility factor is more important for ranged weapons than for melee, and beyond 12 metres range this importance increases (essentially, at longer ranges it becomes possible for an agile target to dodge a missile attack or for an agile shooter to counteract that or anticipate it).
– The body size of the defender (i.e. a tiny creature is harder to hit than a huge one)
– A hit is much more likely if the defender is unconscious and close to the attacker

An ineffective strike will merely cause a small Energy reduction to the defender. An effective strike may also cause one of over 330 different Critical Hits, which include such injuries as broken bones, stun effects, ripped flesh and torn muscles. Critical Hits typically cause both Energy and Activity reduction. These effects will be for a limited time duration, ranging from a couple of combat turns (mild stunning) to several days (broken bones). Some injuries recover in steps: for example, broken ribs will become bruised ribs after some time, with a lesser Activity penalty. 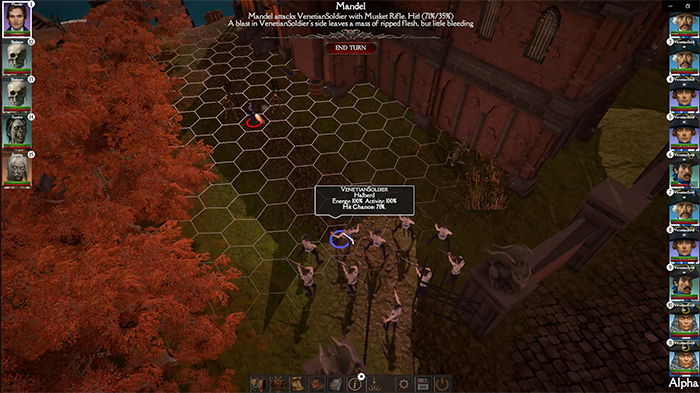 For melee weapons and some ranged weapons, the amount of damage caused is also affected by the Strength of the attacker. If the defender has high Constitution, all damage received is reduced.

Each weapon is classified by the type of injuries it causes, as well as its relative effectiveness against unarmored opponents or those wearing leather or metal armor. For example, edged weapons are good against leather but poor against metal, while blunt weapons are moderately good against each.

You can wishlist and follow The Necromancer’s Tale on Steam: