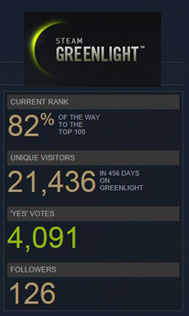 Musclecar Online is now 82% of the way to the top 100 games on Steam Greenlight.

Let’s give it a last push and get the game released on the biggest appstore for PC and Mac gamers!

If we get released on Steam, I will commit to adding the following features to the game, which have been the main things that the players have been asking me for:

1. Making it ‘proper’ 3D driving, with..
2. Hilly/Offroad terrain circuits.. which can be sculpted in the track designer
3. Springy offroad suspension (see technical demo of this below)
4. Bridges
5. Customised, player-uploaded car skins

Here’s some details on the offroad suspension I have been working on: Shiva Raycast Car