Lots of stuff done this week! — transparent dialog boxes, smoke/dust from cars, collision impacts — spent a lot of time crashing vehicles into walls and other vehicles in order to get collision forces working nicely. This was something that was very much incomplete in the Torque engine, which seems strange as the vehicle physics is very nice in other ways. I also did some work on the ghost car, whose location is an estimated position with its accuracy affected by the driver’s skill. Car handling is also affected a little by driver skill. Added surface properties for tyre friction (e.g. mud vs. tarmac) and bounciness (e.g. concrete vs. tyre walls). Added speech bubbles, races with lap counters, server-controlled countdown timer… 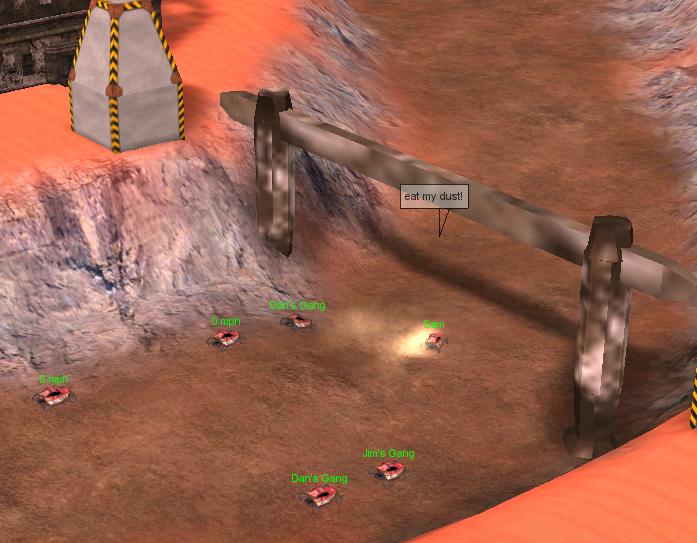 And we ran our first live test on Thursday! Thanks to Jim and Dan for helping out with this. Who knows guys, with some diligent practice maybe I won’t kick your asses so badly one day! …
…er… or something…

Playing around with the vehicle physics in Torque, experimenting with different types of suspension, tyre forces, centres of gravity, etc. The original intention was to codify the game rules in a similar manner to a boardgame (CarWars from Steve Jackson games, anyone?) but the more I use the Torque system the more I’m inclined to let the physics engine do the work of resolving control, skidding, crashing etc.

I have also been prototyping the in-game vehicle control GUI: basically you have a speedometer which shows current (red) and target (grey) speeds; you also have a steering wheel which indicates the angle of your front wheels. They are clickable and also controlled by the arrow keys while the GUI is visible. When you select a vehicle in-game, the circle around it indicates how far it will go in 1 second, and a second ‘ghost’ version of the vehicle is shown indicating where it will get to after steering and physical forces are applied for 1 second. The idea is to calculate this ‘ghost’ version using ideal tyres that don’t skid… otherwise it’d be too easy to tell when you were pushing it too hard! 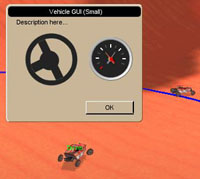 I’ve also coded up impact forces on the vehicle: when one gets hit by weaponfire, the game will apply a force at the correct point, which may affect handling or even blow the vehicle into the air. The mouse does it at the moment…it’s fun!

Some outrageously large field artillery must have hit this car… which naturally we need to have in the game, some nasty big weaponry will defend truck stops and the like…

Integrated mySQL for server object persistence.
Made the camera conform to the landscape, staying a fixed height above it at all times.
Created 2 separate simulation timers, 1 realtime for camera, weather effects, fires, etc., and the other advancing only on command, for cars, characters, etc. Torque treats the latter as if they were running in realtime, so its physics code still works for them. 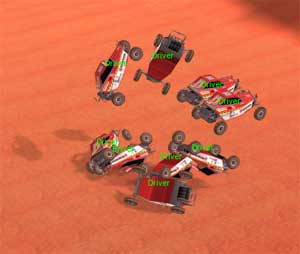 Honestly, I’m not dropping them from 50 metres just to watch them smash! — they’re actually hanging in the air waiting for me to tell them another second has elapsed