This has to go down as one of the ‘good moments’ in my Darkwind odyssey..

A few weeks ago, after much discussion, the Rules Council (RC) and I decided to downgrade the effectiveness of the ‘sniper’ specialism for heavy weapons. This was an attempt to rebalance the over-powerful car cannon and similar weapons. But it caused a lot of trouble, tantrums and players threatening to quit the game, etc. The same nonsense I have seen several times before.

So eventually I lost my cool and reversed the change, making this forum post: “You know what? I’ve had enough of this crap. I’m just gonna revert it. Anyone want any tweaks in future? you can go sing for it.”

Anyway.. there’s a long-term player who goes by the screenname of Rev V, who runs a gang of rampaging post-apocalyptic nuns… and the Good Reverend has been asking for chainsaws in the game for over a year now…

So he sung for it.. needless to say, I spent most of the weekend implementing chainsaws in the game

Love to pull on the ripcord.
Squeeze that trigger hear the engines whine.
Got gas to burn, so Mr. Redfern….
I think chainsaws would be fine!!!!!

We got lasers, but no chainsaws…
As a reverend, I say that’s a sin!
Between you and me, screw the RC!
Do what’s right and put ‘em in!!!!

My experiments using the tilt sensors to fly a spaceship model have turned into a 2D Asteroids-like game with 3D models. The tilt sensor has been replaced with standard virtual joystick controls for the iPhone.

This started off as a simple shooter but quickly started to take on a story-line; I have about 20 missions planned, focusing on a war between Asteroid Belt colonists and a Mars/Earth alliance.

Spaceship models were bought from the excellent 3drt.com 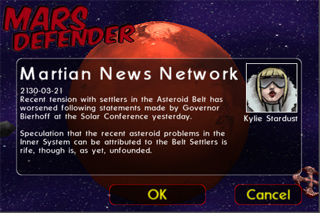 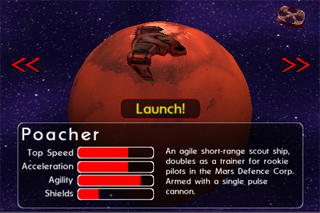 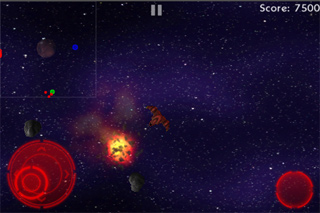