Afterburn 2150, a space shooter that takes you on a tour of the solar system, is nearing completion (phew!). 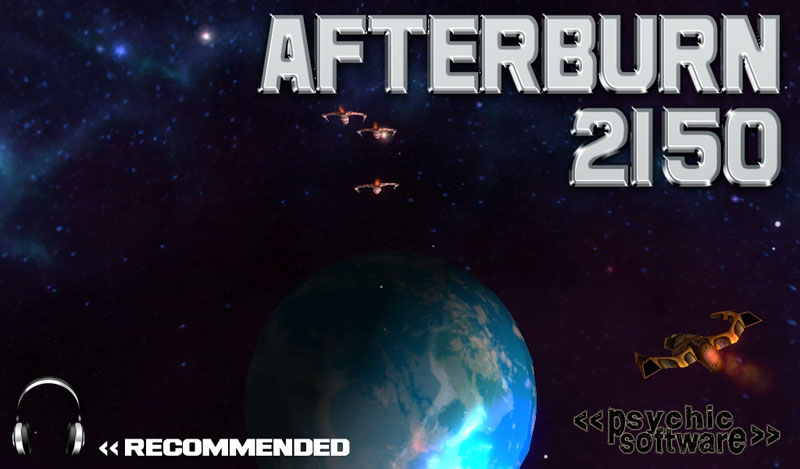 And an Android .apk here

The reason headphones are recommended (apart from the kickin’ menu music) is that the 3D audio helps you know where offscreen enemies behind you are shooting at you from.

I have been making good progress with Afterburn 2150 over the last couple of months.
In the last few days I got the powerup system finalised: there will be 6 different powers: afterburn, rapidfire, multifire, shields, guidedfire, and bomb.

Initially, the powerups were to be collected by driving thru 3D objects in the game, but this seemed (and looked) too cheesy, so eventually I dropped that idea and made it so that you gather ‘energy’ at the same time as points, and then spend this energy on the powerups by sliding out the 6 icons on the right of the screen. I prefer how this plays out anyway, as it adds some choice and tactical decision making which you wouldn’t get if you were simply collecting specific powerups onscreen.

Music was another aspect which I worked at and eventually backtracked on. I’m using a really nice track “Ride the Wave” by a guy called Matt Brodie, from Shockwave Sound. Nice crunchy guitar, solid drum section and plenty of ride cymbals (which carry across nicely even on small speakers). I sliced the whole thing into loops and then had them dynamically chosen based on the on-screen action – but it got too repetitive, so eventually I moved the whole song back to the menu screen, where it works really well. The in-game sounds now involve spacecraft engines, ‘flyby’ sounds, bullets and explosions, all in 3D. The 3D aspect is actually quite important since often the enemy are firing at you from offscreen and you want to basically duck and dive, dodging away from whereever a bullet is coming from. The audio is from freesound.org

There’s also an online highscore system and there will be a few ships to choose from. I’m hoping to get the game out as a Beta version on Android in the next week or two.

I have just uploaded web demos of Afterburn 2150, Block Rockin, and Mars Defender.

Afterburn hasn’t been mentioned here before – it’s a 3D shoot-em-up that takes you on a tour of the solar system while blasting the baddies. This is an early demo of it.

The main reason I have posted these is that I have started teaching an undergrad class using Shiva, and these games provide perfect examples of game development features that I will want to discuss and illustrate.