Although we have been prototyping various parts of Godkin since about a year ago, we didn’t tie down most of the details until around June this year. Since then, there’s been a big push on to get the game up to a demonstrable state for Galway Games Gathering (this weekend).

The core of Godkin is an online party-based combat RPG, where you play as demi-gods defending procedurally-generated mortal realms that are being invaded by hordes of monsters. As you gain experience, you will learn spells which are aligned with one of 10 different elemental gods. The monsters are also associated with specific elements, and gathering a party with appropriately varied skills will be an important goal with the more difficult game maps. Technically, the online play uses an optimised mix of peer-peer and client-server networking; I’m planning to write a blog post about this quite soon. 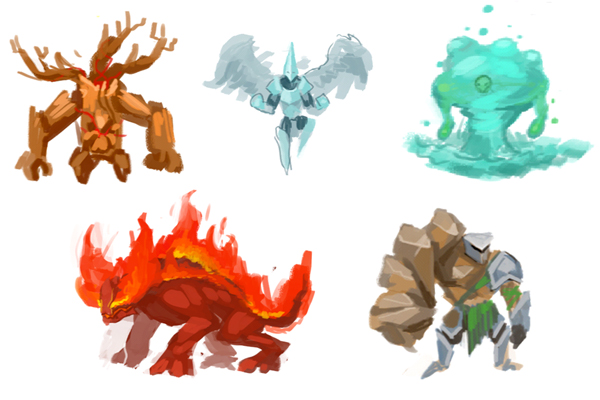 To win a game of Godkin, your team will have to balance attack and defence. You’ll have to track down and eliminate all of the monster camps on the map, while also overseeing the construction of walls, barricades and towers for the villages. As monsters approach the villages, your role will become that of field-captains: fighting, yes, but also marshalling and instructing the mortal characters who you are trying to save. Working as a team will be critical to achieving all of these simultaneous goals.

The mortal characters in the game take the form of villagers and followers. Followers are essentially combatant villagers who have pledged themselves to your service, and who you can bring with you into different games. They level up and gain skills, leadership ability, and courage; however, they can die (permanently). You issue orders to followers – gathering resources, constructing defences, or joining you on at assault on the monster camps. However, you don’t directly control them – if you push them into too much danger, their courage might break and they will run away. Your followers, in turn, gather together villagers to assist them with their gathering and constructing.

Godkin maps are procedurally generated – they include mountains, lakes, seas, forests, and villages – as well as caves and other areas which are not part of the core game win/lose conditions, but where random monsters can be found and rare loot gathered (treasure, magic weapons and armour). The difficulty of the map will be defined in terms of its monsters and resources – and as you get more experienced at the game you’ll unlock more and more challenging maps. We’re also going to include weekly challenge maps and high-scores – so teams can pit themselves against other teams playing the same map. I’m planning to write a blog post fairly soon about the procedural map generation used in Godkin. 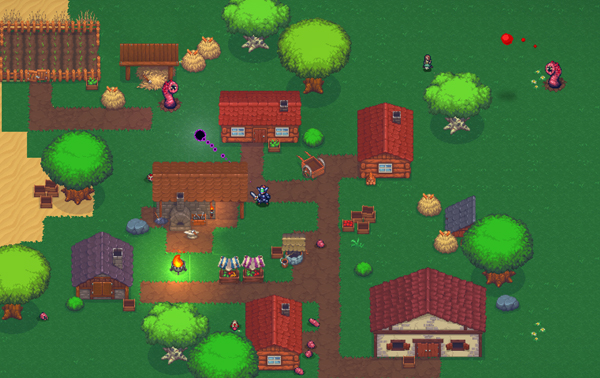 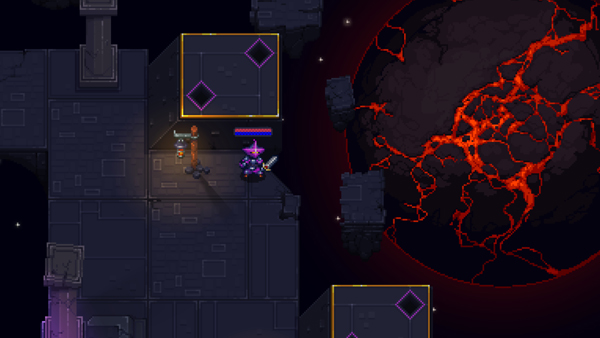 Godkin is being developed by the same team that made Goblins and Grottos, which we released in July 2016.
Game Design: Everyone
Programming: Me
Art: Björn
GUI Design: Jonas
Audio: Ian